St. John’s has a long standing practice of gifting individuals receiving baptism, graduates of high school and university, and others going through life transitions.  It began with the baptism of infants.  They were given a receiving blanket embroidered with their name and date of birth with the assurance they were, are and will always be ‘wrapped in God’s love.’  In the past recipients were typically children, but since my call to the congregation it has expanded a little.  The recently widowed, widower-ed, moving away or into assisted living were given a prayer shawl or quilt, because in my mind, we are all ‘wrapped in God’s love.’ 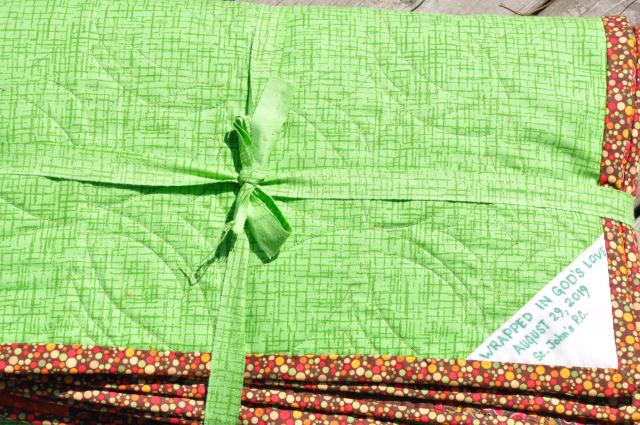 Recently in the presbytery there was an ordination of a young woman as a Minister of Word and Sacrament.  It was a month short of my tenth anniversary of my own ordination.  I was reminded of the prayer shawl a congregation in the presbytery gifted me on the night of my ordination.  I had just finished a quilt intended for a congregation member recently entering a nursing home.  Sadly, they only lived a few days beyond the transition.  It is a quilt drenched in prayer and who needs it more than someone newly ordained.

This was intended to be a simple Trip Around the World quilt.  Once I began placing the blocks on the design wall I decided I had to line up the strip blocks as much as possible.  Durn OCD.  Solving the puzzle was worth it, I think it turned out awesome!

Exodus 29:29  The sacred vestments of Aaron shall be passed on to his sons after him; they shall be anointed in them and ordained in them.