As with most projects, completing and assembling the blocks happens fairly quickly. I think the borders took another three years. I couldn’t locate complimentary William Morris fabric to my satisfaction. I finally settled on the narrow white and green borders with fabric from my stash. Then I didn’t have enough fabric for the outside border and had to add the corner pieces. Not ideal, but added just enough for border and binding fabric to finish.

The next challenge was finding backing material. Again, not enough William Morris inspired fabric. I procrastinated again, settled on something close in colour.

The intent was to use the domestic machine to free motion quilt. I used a stencil I felt was similar to the style of the era of the fabric designs. I used Crayola Ultraclean markers for placement. The markers worked really well, except for the orange, it took some extra work to remove after the quilt was washed in cold water. I was relieved since the design had been marked on the fabric for over a year.

Make no mistake, all the blocks are the same. They are all Aunt Nancy’s Favourite in two different value settings. One is dark, medium, dark, and the other is medium, light, medium placements for the stars giving the overall quilt the appearance of diagonal movement. I am super pleased with the effect.

My sister finally received the quilt at Christmas. She appeared please with it. I have not had the opportunity to see it since the pandemic has restricted travel between provinces.

Proverbs 7:4 Say to wisdom, “You are my sister,” and call insight your intimate friend …

Over a decade ago I met one of the most interesting people I have come to call a friend.  We met in the Where’s Willy forums.  He is a veteran living in Ohio.  We’ve had some serious heart to heart conversations.  He is intelligent and funny and thoughtful.  He has interesting hobbies, a fascinating life, and a great family.  The popularity of fb gradually lured us to other ways of social media and we don’t connect as much.  I miss it.  While still in northern BC I came across a quilt pattern in a magazine that immediately reminded me of him.  Over three years already!  The cut pieces came with me to Manitoba and I managed to complete the project last summer.  My bad waiting so long to get around to posting once it was completed.  I know it was last summer because that was the summer we had the purple paint petunias bracketing the bench on the front veranda.

I quite pleased with this one.  I used my favourite sort of fabrics, reproductions of civil war designs – blues that incorporated tiny stars, and red with stripes.  The finished quilt was lap size.  I think that bed size quilts are presuming too much.  First colour preferences, second bed size, and this one was a surprise, so I couldn’t very well ask.

I mailed it off end of summer.  They were surprised, and delighted, I think.  They sent a thank you stating as much, my friend commenting it would be most welcome once the cold weather arrives.  This quilt carried many prayers with it.  Serving in the navy does not come with a plethora of good memories, especially when one serves in a way that sees atrocities done to bodies that no one should.  The thought gives me a heavy heart and an ache in my throat.  It’s becoming more and more difficult to witness the hatred and violence of the world.

The quilted design of loops and stars was applied by The Quilty Guilt.  So blessed to have a long armer in the house.  This quilt is one of the first to not have a flannel back.

2 Chronicles 14:13  Asa and the army with him pursued them as far as Gerar, and the Ethiopians fell until no one remained alive; for they were broken before the Lord and his army.

Christmas is always crazy for clergy.  Multiple worship services, parishioners ill because of the weather, wind-up parties, more often than not a funeral, even more rarely a wedding.  Add in all the personal preparations for Christmas and you have a recipe for an abundance of stress and little time to sit still in awe of the reason for the season.

Today there was a wedding.  Lovely, appropriately white and red colour scheme for Christmas.  Two 30 somethings, 14 children between them, tattoos and pretend bling, chaos and nerves.  It has been my practice to give a quilt as a wedding gift.  I had this top finished for some time, the Quilty Guilt quilted it yesterday and I spent the rest of yesterday and this morning binding it.  Turned out beeeeeautiful!  Hubby didn’t think I should give it away, but I did.  It really did turn out nice.

As usual, I didn’t have enough fabric for the back.  I pieced in an orphan block and a few other odds and sods to make a piece big enough.

It was quilted with hearts, perfect for a bride and groom.  Wrapped in God’s love in grace I pray them all the best for their new life together.

1 Corinthians 13:4-7
4 Love is patient; love is kind; love is not envious or boastful or arrogant 5 or rude. It does not insist on its own way; it is not irritable or resentful; 6 it does not rejoice in wrongdoing, but rejoices in the truth. 7 It bears all things, believes all things, hopes all things, endures all things.

I’m being very deliberate in attempting to finish some projects. I’ve had these bow tie blocks finished for some time. I bought four charm packs of Seasons Gatherings in Fort St. John, BC over four years ago. I love this fabric, it began my love for reproduction/traditional/civil war type fabrics. 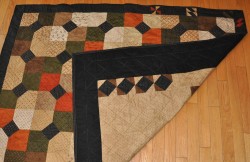 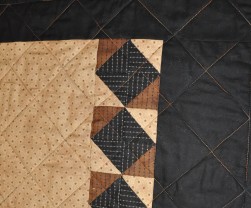 I had no motivation to finish this one since I didn’t have anyone in mind to give it to, and I didn’t have suitable fabric for the back.  When we moved into the new house we needed living room furniture.  A local furniture store was having a sale and we picked up a lovely chocolate brown leather couch, chair and loveseat.  This quilt compliments perfectly, recipient me!

I pieced the back with more Seasonal Gatherings fabric.  I used a variegated thread for the quilting – perfect on the solid black back.  The only drawback is a solid colour shows all the dog hair, so don’t look too close.

Ecclesiastes 9:4
Anyone who is among the living has hope—even a live dog is better off than a dead lion!

I am prevented from quilting.  I am going through withdrawal.  I miss my stuff.  If you have been following along, you will know that I have a new job in a new city.  Our house in British Columbia has not sold.  God willing it will soon.  We packed most of our belongings and put them into storage.  All that remains in the house are the largest pieces of furniture so it will show well.  We just brought what we thought we might need until Advent.  At some point soon we will return to move everything here since I have no inclination to drive across the country with a moving truck in the winter.  Yes, you may have guess it, my sewing machine, my stash, all my notions are 1800 kilometres away, waiting, while I am here, missing them.

Before we moved, I managed to complete the top I introducted to you here.  I didn’t care for the layout provided.  Here is my spin.

Job 5:12  He thwarts the plans of the crafty, so that their hands achieve no success.