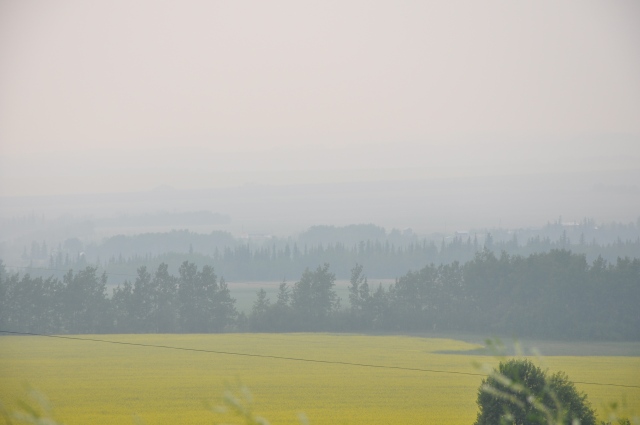 On Sunday we drove to Wanham, Alberta to attend the retirement potluck picnic for a colleague.  It had the potential for a beautiful drive, but smoke from forest fires in Northern Alberta has blanketed the region.  The canola fields are blooming in full glory, some places it give the impression of descending into an ocean of yellow, with copses of aspen floating as green islands.

The smoke was pushed by winds from Mackenzie County, which is more than 900 kilometres to the north of Edmonton, or roughly the same distance from Edmonton as Seattle. There are a dozen wildfires brining out of control in Mackenzie County, including one near Zama City that has consumed 155,000 hectares since it was spawned by a lightning strike June 21.

Last night we were spellbound by a lightning show illuminating and backlighting huge columns of clouds to the north of us.  It was so intense that the even was referred to during the weather forecast on Global News this morning.  I expect there may well be new fires as a result.  We did get some rain over night and are expecting more today, via thunderstorms.  We really need the moisture, hopefully there will be no hail with it as the crops have great potential this year.